Electric Market Reform In the Southeast

For the first time in twenty years,  electric market reform has become an important topic of interest in energy and legislative communities in the Carolinas. It is important that stakeholders remain aware of these discussions and stay informed.

The S.C. General Assembly initiated the first step for electric market reform in the Carolinas with the passage of a study bill aimed at creating a regional market through what is known as a “regional transmission organization” (RTO) to allow competition into the market. Currently in the Southeast, investor-owned utilities control all aspects of energy generation, transmission, and distribution. Political will is ripe for change among energy, legislative and consumer stakeholders in examining different models that could reduce consumer costs, allow for greater procurement flexibility, and increase the opportunity for competition. All of this can be done while maintaining the health of the utility and encouraging economic growth.

The South Carolina Electricity Market Reform Measures Study Committee (House Bill 4940) became effective in September 2020 and will be finished in 2021 in time for consideration by the entire S.C. General Assembly by 2022. North Carolina is likely to follow suit and introduce its own energy market reform study bill, mirroring what South Carolina has done now that the N.C. General Assembly has reconvened for its Long Session.

There are lots of ways to infuse competition into the energy market but what are the options and what do each one of them bring? 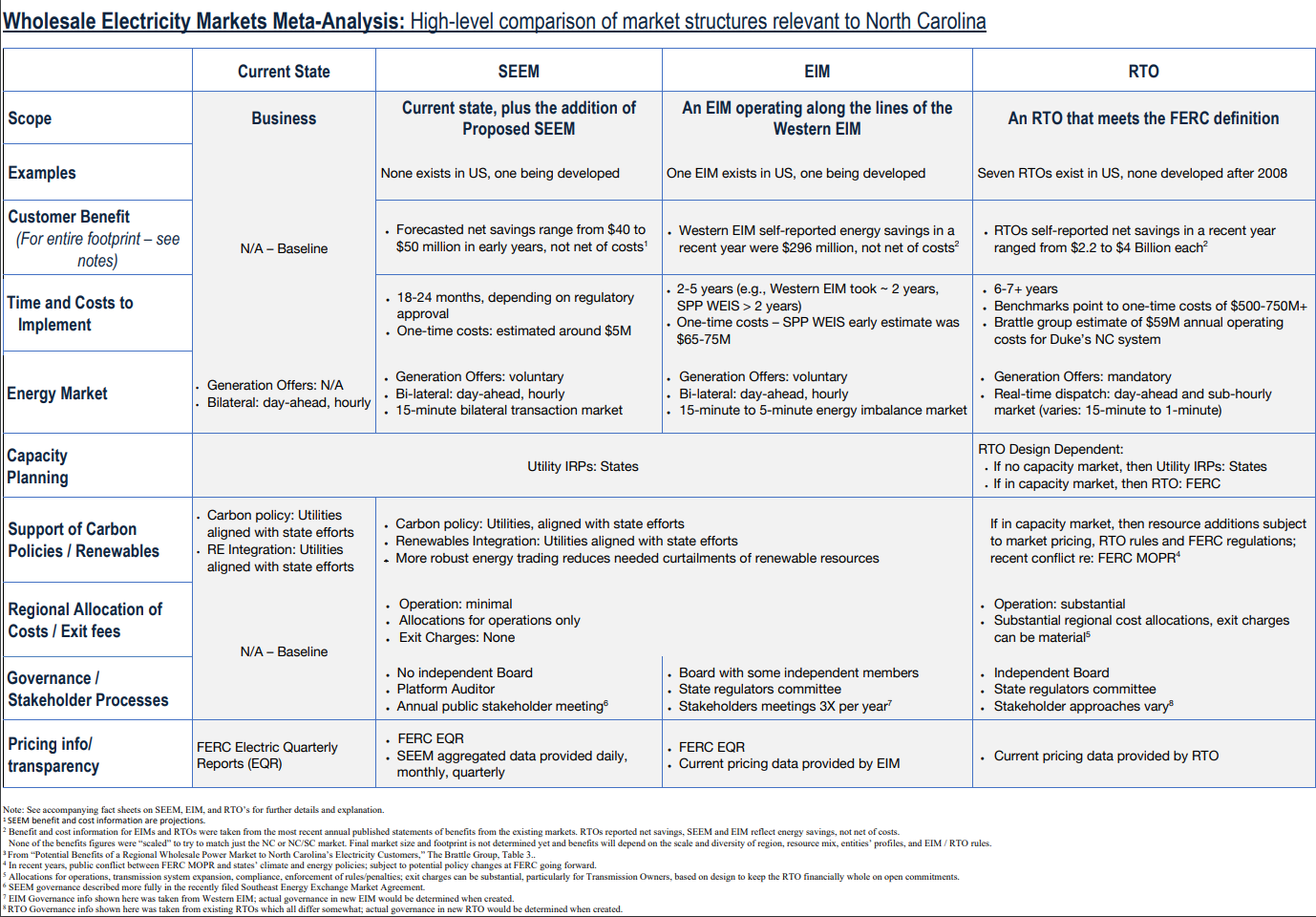 With pressure to consider some kind of market reform, Southeastern utilities proposed the Southeast Energy Exchange Market (SEEM). This is simply a minor reform between participating utilities based on a manual process of bilateral energy trades automated through the use of a computer algorithm. This automation would increase the number of trades in the participating regions – allowing for better energy balancing and integration of new generation resources across the service territories.  Duke Energy filed the SEEM proposal before the N.C. Utilities Commission and the Public Staff did not believe that they had any jurisdiction to comment. Now, we are waiting for a ruling by FERC and details such as trade and price information, and the inclusion of a market monitor, to name a few . 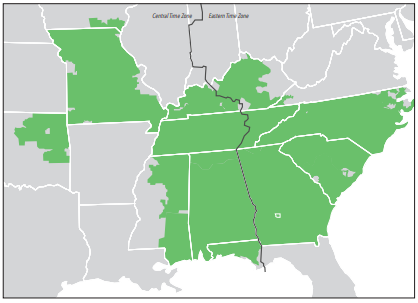 Members of FERC have heard from key stakeholders on the SEEM proposal. In short, it is a mechanism designed by the utilities to automate energy trading among the partnered utilities; the overall goal is to create a greater efficiency throughout the utility network. According to a study by North Carolina’s Department of Environmental Quality, SEEM is the cheapest and quickest option to implement and is forecasted to save $40 to $50 million dollars in its first few years (Click here to learn more, pages 114 to 125). Independent studies and customer advocacy groups throughout the affected regions have pointed out that in terms of market reform, the SEEM proposal is the most pro-utility option on the table. The SEEM model would constitute an almost unnoticeable savings for customers and would not provide the same benefits as a proposal allowing for more competition.

Another option that has been proposed and is currently in operation throughout much of the Pacific coast of the United States is an Energy Imbalance Market (EIM). The EIM model allows participants within the group to operate independently based on rules set by their state and federal governing bodies. However, unlike SEEM, an EIM has an independent administrative body that oversees the market providing centralized, automated dispatches for imbalances. The system fosters competition among energy generators and utilizes a more cost-effective approach to energy supply throughout the network. The Western EIM has reported over $1.1 billion dollars in savings for its customers since 2014 with room to grow as the market expands to more states. 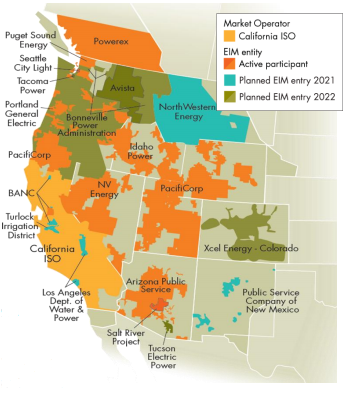 According to NC DEQ’s study, an EIM in the Southeast could constitute savings in excess of $297 million dollars annually. Some of the downsides of an EIM are a slightly longer implementation period and a significantly higher startup cost. However, including startup costs, an EIM would provide more than $150 million in customer savings in the first year alone, and  a 10% to 15% savings for customers. This would have a major impact for all customers and has a proven track record of success.

The most popular model for market reform throughout the United States is the Regional Transmission Organization Model (RTO). The RTO model, unlike the SEEM and EIM models, utilizes an open real-time balancing for supply and demand which favors the most efficient and cost effective source of energy for procurement. In addition, the RTO provides greater transparency. Similar to the EIM model, RTOs drive efficiency across the board by introducing a high level of competition among energy procurers throughout the system. According to NC DEQ’s study the RTO model shows multi-year savings for consumers well into the billions. To bring these numbers closer to home for the average customer, this would correlate into a 20-30% reduction in energy costs. For much of industry and manufacturing, energy is a top-five impact item on their budget and  expense sheets. A Regional Trade Organization creates cost savings by creating a competitive marketplace for energy procurement and thus drives effectiveness and efficiency comprehensively.

With its expected cost savings, it is no surprise that there is political will to explore energy market reform. The savings accrues to all customer classes. What household or industry wouldn’t want to save on their utility bill each year?

Industrial savings translates into saving jobs as well as adding new jobs with economic expansion. In fact,  industrial expansion adds to the utility’s load growth. Additionally, efficiencies from market reform better match generation to consumer load. It is not inconceivable that the Carolinas would eliminate overbuilding generation assets and retire older uneconomic plants. By only paying for what we need, we all see significant savings.

Under the current model, a utility is granted a Return on Investment (ROI) for the construction and maintenance of their fixed assets. This primary profit function for utilities is a sensitive variable and one that they carefully monitor and fight to protect at all levels of utility regulation. This current utility model favored in the Southeast does not incentivize greater efficiencies and thus drives complacency – operating in the same old way as opposed to seeking  continuous improvement and customer centric approaches.

As for-profit companies, Duke Energy and other utilities rightfully have a primary focus on shareholders profits. Customers and stakeholders are often second to profit. Stakeholders should advocate for the profitability of the utility and for the quality of their service. CUCA advocates for this as well as for customer centric reform that incentivizes efficiency, flexibility  and cost reduction for its industrial consumers.

CUCA looks forward to working with Duke Energy toward this change with goals that are mutually beneficial to the utility and all its consumers. For North and South Carolinians, a South Eastern RTO or EIM could be the catalyst behind a wave of industrial investments bringing high quality jobs to communities during one of the most disrupted economic seasons in American History. There is no time like now.